I love a good Sunday. We try to make the best of every weekend, but lately there’s been a lot of staying at home, doing nothing. Well, no more! Hubby and Brodir went out for the day, taking a pair of grandparents with them for a good day outdoors. The weather’s perfect for it – and not a cloud in the sky. The temperature’s even above freezing.. As it turned out when I went outside myself, there was actually quite a lot of wind. Which once again made me wonder where all my hats have gone. I have at least two warm and comfy winter hats, but I cannot for the life of me tell you where they are. Anyway. 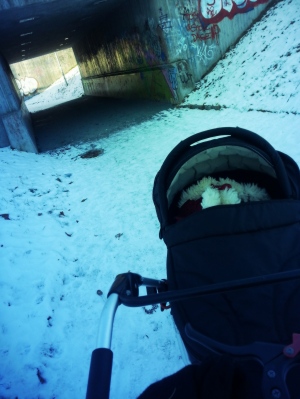 Systir isn’t quite old enough to go playing in the woods yet, so we stayed home. I dressed us up and we went for a walk, with me singing out loud like some crazy person. But come on, the Baseballs have some brilliant walking music, and I found a playlist I’d forgotten I had. I could have been out much longer if not for the damned wind ravaging my unprotected ears (due to the above-mentioned hat-problem).
I’ve baked a little and my best friend has come by to munch on the results. Today is fastelavn, a day that doesn’t have much religious significance anymore, but it does demand some tasty baked goods. Yum. 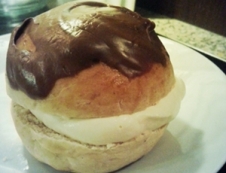 To think it’s been nearly two years since I laid this blog to rest. That time has flown by at a ridiculous speed, and life has gone through numerous ups and downs in the rather short time that has passed. There have been deaths we didn’t see coming, births we certainly did see coming. Laughter, tears, joy and misery – everything life is supposed to contain. I’ve spent a bit too much time watching TV (lots and lots of Doctor Who in particular), not quite enough time studying. Household chores have suffered as I much prefer to play with the kids, and I keep trying to find a system I can stick to, but after a few weeks it always drifts into nothing.

Basically – Long time, no see! Stuff has happened, little has changed. I’m back!

However shall we avoid starvation!? We sold our stove yesterday. That means no more cooking until we’re safely tucked away inside our NEW apartment. Luckily, it’s not that long till we’re there. We’ll be getting by just fine on microwave dinners, take-away and restaurant meals until then. No problem, really. 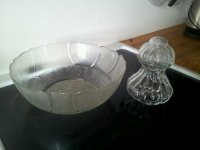 nonsense while we’re at it. Interested in a serving bowl, perhaps?
Or maybe a comfortable chair? A couch? A table? We have it all! And we would very much like to be rid of it.

Am I the only one who sees tidying up an apartment in the midst of moving-chaos as a waste of time? There are boxes wherever you look, clutter that has no home until the cabinet or shelf you pulled them from has been put up at their new address. Things are growling at you from beneath the couch, bags of clothes are scattered every which way, books are piled in teetering towers… and you just can’t find a reason for doing anything about it. After all, in ten days all the furniture and chaos will be gone, and cleaning what’s left will be a breeze.

Today, however, we had a showing of our apartment. That meant reining in the chaos and make it look presentable. Tigger was a HUGE help, of course.

Part of the moving process is getting rid of giant heaps of rubbish that for some reason have gathered up over the years. But not all garbage can be identified on a glance. Take CDs. Some you’ll want to keep, some you’ll want to put on fire and catapult into space. So while I’m organising books and DVDs, and glasses, and toys and whatnots into boxes, in the background I have a close to constant stream of music. Music that makes me wonder what on earth I was smoking back in the day, often as not, but occasionally bits of music loved and forgotten surface, and I get all reminiscent and weird.

Appartment’s a mess, and progress is slow – much due to Tigger being magnetically drawn to objects he’s not allowed to play with. But it’s okay! Because in 26 days, we are OUTTA HERE! Goodbye impossible-to-combine-with-social-life-countryside, hello wonderfully-central-but-not-too-central-town-life.

“When you reach the end of your rope, tie a knot in it and hang on.” — American Proverb

I had one of those desperately-wishing-to-bash-head-against-wall-days today. So, I’ll pass on the lengthy blogpost and rather curl up and die a little. If that’s OK.

–> Norwegian version <–
It doesn’t matter what I’m intending to do, it could be something as simple as getting out of bed, as fun as going to a party, or as dull as writing a school paper. It doesn’t matter how much time I have to get ready or finish up. Because, see, I have all the time in the world. At least, you know, until I don’t anymore. I have all the time in the world, right up until the moment where I don’t have any time at all. At times it seems like Tigger has inherited that particular trait, the way he’s playing on the floor, making happynoises, only to suddenly turn around, screaming and refusing to lie there anymore.

I usually have big intentions to “pretty up” before going some place. Curl my hair, put on the perfect make-up, find just the right jewelry.. But then, an hour before I have to be out the door, I’m still sitting in the couch in my pajamas, no make-up in sight, baby gurgling on the floor in a onesy and tights. Only then do I start getting our clothes ready, change his diaper, get myself and the baby dressed, apply some sort of make-up. There’s no time to do anything elaborate with my hair, all the jewelry lies forgotten in their boxes.

The dog food has to be prepared. The babybag (which I just realised I haven’t the foggiest idea what is called in English, though I have a strange idea I should know) has to be packed, Tigger has to get on his outdoor-clothes and get strapped into the baby carseat.. Basically, you can bet that something will be forgotten. I take pity in the fact that at least I’m not the only couch potato beneath this roof.

Now, would you look at that! I made it through Christmas without getting ill, only to come down with the flu on the very first day of the new year. Cheers to that! It is typical, though, that the whole family comes down with it just as Hubby’s going back to work. One exhausted family, coming up! But then, we should be getting used to that by now. Being exhausted, that is. I won’t complain, though! It’s a bad way to start off a year, complaining. Much better to throw in some humour. So that’s what I’ll do. Steve Hughes, everybody!